* This ROI is probably not the final ROI due to primarily two reasons:  The trade (all trades really) can require additional margin and often does during a trade, AND most shorted options are closed prior to their expiration date.  Nothing unusual about this.   To make the ROI stated, the trade would have to have no drawdown at all and the option would have to be held until it expires.  I look at all trade’s ROI, one of criteria I use to evaluate the efficacy of a trade. 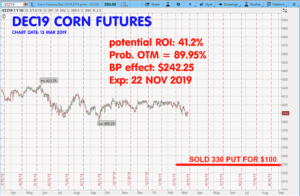 Comments on this trade:

The seasonal tendency for the DEC Corn contract (based on 15 year pattern averages) is to Peak in MAY/JUN/JUL, then to fall into the North American harvest season:

One complication this year is the tariff/trade talks between USA and China.  The stocks of corn for the new crop (harvest starts in mid September) are currently forecast higher than they should be.  US Trade negotiator/rep Lighthizer suggested that there is a 120-page document draft being worked on.  The USDA WASDE report on March 8, 2019 last week included a 25 million bushel reduction in ethanol production allocations, and it does not have any possible increases in exports to China yet included.  An unidentified source has suggested a purchase could be in discussion for 7.0 million metric tones to China; that is a 282 million bushel package, which would be plenty large enough to turn corn’s presently oversold DEC19 (new crop) around.  Another number of 790 million gallons of ethanol to China was also mentioned, that would be +275 million bushels equivalent.

When I selected the 330 strike, more than 60 cents below the current DEC19 contract price – I thought of the many months of time ahead for some agreement to be reached.  Even half of the floated about numbers (mentioned above) which be a huge boost to corn prices in the new crop months.  Going that far out (to DEC19) allowed me to collect enough premium on time value to make this trade doable.  At 60 cents OTM, the 330-strike is only requiring a small margin amount – low enough to rate a potential ROI of 41.2%.   I put in the order to sell earlier this morning and got filled at 2.0 cents.  Corn prices have been both UP and DOWN several time in trading today.

My choosing the 330 PUT may be a bit conservative, but I opted for a strike I thought would contain the downside (stay OTM) if no trade negotiations are forthcoming.   Corn prices on the DEC19 corn contract usually get what is called a rise of ‘weather premium’ shortly after the intended plantings report by USDA at the end of this month (March 29th.)  IF/When this happens my plan is to sell some CALLs on the DEC19 Corn to form short strangles. If I can place those short CALL DEC19 at strikes of 450 to 500 (depending on trade talks and price movement over the next few months), I will do so.

The practice of placing each leg of short strangle at different times is sometimes called “legging into a short strangle.”  If I get any more news and/or follow up to those numbers being bandied about, I will post comments here on the website.  I like today’s trade, especially with the possibility of legging into the short CALLs in the coming weeks.  I did not do any excessive number of these options as I like to take a balanced approach to positions.  I know from past experience that “betting big” on a favored trade can be hazardous to one’s account balance.  Moderation.

The total Open Interest by commercial traders has risen and is a net short position.  If there is some rush for that large number of commercial traders to exit their shorts, there could be some run up of prices quickly.  Now, and only with the genius of hindsight, I can say the 360 strike JUL19 PUTS I exited are looking better.  But still, they got too close to the money for my liking and I don’t regret avoiding more risk with them.  I am much more comfortable with these 330 PUTs  being 60 cents OTM now.   Plus, I have set the groundwork to sell DEC19 CALL when the time is right (and it could be a while, weeks or even months from now.).

By the way, whenever you need to convert metric tons to bushels in any of the C, W, or S a link to the CME is on this website at the Resource Links TAB or you can use this:

Summary of My Positions:

Note:  I always use examples with a quantity of 1 (one) option per trade.  This is not because I only trade one of each option, it is to keep the illustrations simple and easy to understand in the newsletter.  Please remember the strategies of the trades I post here are risky, and not suitable for all traders.  Posts here are for educational purposes only.

That is all for now.  I want to post this trade and comments now. – Don

This type of trading is risky and not suitable for all investors. Any use or reliance upon the information or recommendations is at the sole discretion of the subscriber.